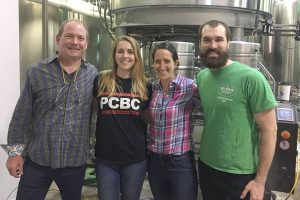 Port City Brewing Company is proud to be small and Independent. We cherish our ability to determine our own future: which beers to brew, when and where to sell them, everything. As an independent brewery, Port City Brewing controls its own destiny, we are not a small component of a corporation’s larger plans.

Independence allows us to be nimble and responsive to the market; we brew what we want rather than what tiers of management dictate. Port City drinkers are a loyal bunch and not shy about telling us what they’d like to see next. We would not compromise that ground-level connection by becoming part of some giant international conglomerate.
Our customers know our team, from the part-time Beer Guide to the founder; we have created strong, authentic personal bonds that no corporate marketing campaign could replace. Our idiosyncrasies, personalities, and preferences make their way into the product and imbue the company with spirit and soul. Selling out would sacrifice that very spirit and soul.

We also believe that beer drinkers value independence as much as we do. Craft beer was born in the spirit of Independence. It came from beer drinkers wanting more from their beer: more flavor and more choices.

This Independent spirit is what has fueled the growth and excitement of craft beer; this is what makes craft beer special.

We embody that Independent spirit and want it to live on and thrive!

Thanks for your support of
Take Craft Back!

The crowdfund to buy Anheuser-Busch InBev has officially closed, so you can keep that pledge you were planning on generously and genius-ly spending here, and go spend it on independent craft beer. Cheers!

Go look for an email confirming that you're a real live craft beer lover and not a bot. There might be a nice swagprise in it for ya!

To thank you for doing your part to Take Craft Back, we'd like to reward you in the best way possible; with some really killer swag. Don't like killer swag? That's okay, too. Just hit the "don't swag me" button and carry on.

Everyone loves free stuff. Especially if it's cool just like you. C'mon, click “swag me!” and claim some swag.

Let's get you some goods!

Make your choice below and then enter your deets.

One more thing. Mind telling your fellow independent beer lovers to pledge? 'Cause that would be so nice.

THANKS FOR YOUR SUPPORT!

One last thing. Mind telling your fellow independent beer lovers to pledge? 'Cause that would be so nice.