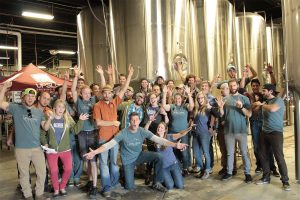 Passion, independence and a connection to the community are the pillars in which craft brewers were founded. Craft beer emerged as a reaction to what has been happening with American beer for decades. No corporate ties, no rules of the road. In step with the craft beer pioneers that paved the way, the independents emerged. Then came the buyouts, the craft vs. crafty, and the “me too’s”​. Now, the non-independent brewers easily blend in with the rest.

Why is it important to know? It’s important because the beer-loving public has chosen the independents, (a trait that was recently deemed in a craft beer study as important to 81% of the craft beer appreciators when making a purchasing decision about craft beer), and the public should not be duped when it comes to supporting their “independent” brewery.

Thanks for your support of
Take Craft Back!

The crowdfund to buy Anheuser-Busch InBev has officially closed, so you can keep that pledge you were planning on generously and genius-ly spending here, and go spend it on independent craft beer. Cheers!

Go look for an email confirming that you're a real live craft beer lover and not a bot. There might be a nice swagprise in it for ya!

To thank you for doing your part to Take Craft Back, we'd like to reward you in the best way possible; with some really killer swag. Don't like killer swag? That's okay, too. Just hit the "don't swag me" button and carry on.

Everyone loves free stuff. Especially if it's cool just like you. C'mon, click “swag me!” and claim some swag.

Let's get you some goods!

Make your choice below and then enter your deets.

One more thing. Mind telling your fellow independent beer lovers to pledge? 'Cause that would be so nice.

THANKS FOR YOUR SUPPORT!

One last thing. Mind telling your fellow independent beer lovers to pledge? 'Cause that would be so nice.